79-year old Hiroyuki Arawaka from Japan keeps company with some really strange friends. That’s because this veteran scuba diver has a 30-year friendship with a fish. The decades-long friendship started when he first saw an Â Asian Sheepshead Wrasse in the waters off the coast of Hasama. Despite their obvious differences and a long distance friendship, they have been able to keep their connection strong. 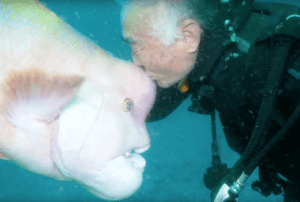 Arawaka has been visiting the fish, locally called a kobudai, in the waters of the Hasama Underwater Park. The Park is found on the coast of Hasama, just a few hours south of Tokyo. When Arakawa first met the fist, she was injured and could not catch her own food. That’s when the diver decided to nurse her back to health. He started to feed her five crabs a day until the fish was strong enough to catch her own food. A week and a half later, the fish recovered. 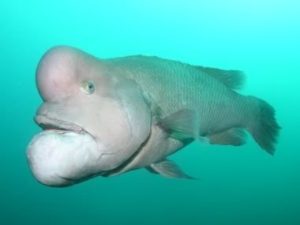 Arawaka believes it was during this time that the bond was formed between the diver and the fish. The two have remained friends, and Arawaka tries to visit her as much as she can. They have become so familiar with each other that the fish lets Arawaka swim close to her, even allowing him to kiss the fish. Asian sheepshead wrasse are the largest species of wrasse, and inhabit rocky reef areas. They can only be found in the waters of the Korean peninsula, China, and Japan. They are also known for their eerily human-like features.