Meet this Tech Savvy Gorilla in at the Zoo

The silver back gorilla at the Louisville Zoo is known to be many things. Like many people who were born in this generation, he enjoys gadgets and can spend hours watching streaming videos on the internet. The gorilla, named Jelani, has also adopted one important facet of the millennial generation; mastering the selfie. Jelani recognizes smart phones and when he is being included in a selfie. He also knows how important it is to check the photo first and if another take is needed. 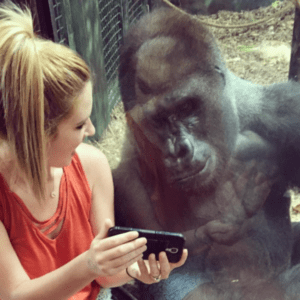 This was first discovered when 19-year old Lindsey Costello visited the zoo. She sat down next to the glass where Jelani was leaning against. Then she started to show pictures and videos from her smartphone. Not only did Jelani seem to understand what was being shown, the gorilla even made some requests on what to watch next. 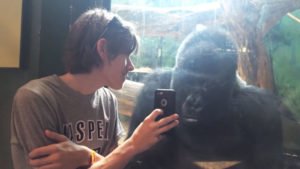 “It was noticeable he liked what he was watching. If I moved the phone away he would stretch out to see it,” said Costello “And if he was tired of a picture or video he would raise up his arm and swipe over. It was amazing!” While Costello and the many people on social media were amazed, Jelani’s curator was not surprised that Jelani was so tech savvy.