McDonald’s Employee with Down Syndrome Retires after 33 Years

Daniel Lybrink of Howell, Michigan just celebrated his retirement from a McDonald’s food chain. Lybrink had been working diligently at the same branch for the past 33 years, despite having Down syndrome. To celebrate his retirement, his coworkers at the fast food joint planned a surprise party at the same McDonald’s. They had called all his family and friends to attend the party. 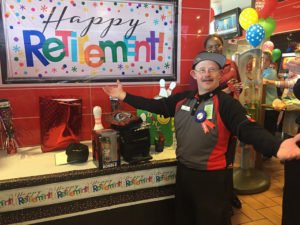 Lybrink started his work at the branch in 1984 where he worked as the ‘lobby manager’. For the next three decades, he dedicated himself to his work. He has since endeared himself with other workers there. And while most have come and gone, he has still been there working his shifts and inspiring people. According to a few of his coworkers, the best thing about Daniel was his work ethic and his ever present smile. Aside from friends and family, the fast food restaurant was also filled with people from the local community that was impacted by Daniel and his personality.

According to the people that attended his surprise party, Daniel had his way of making everyone else feel special and that was just one of his more endearing traits. Lybrink said that he always felt that the place was his second home and that the people there were his other family. He was also very proud of how many people showed up to his party. The retirement party included a cake, a few gifts, and a memory book for his friends and family to sign and share their favorite memories about Daniel.