In Massachusetts, a normal Memorial Day cookout was interrupted when a car suddenly burst into flame. The car had apparently driven into the side of the road, knocking down a utility pole and crashing into another vehicle. Then it suddenly burst into flames. TheÂ worst part was that there was an unconscious woman inside the vehicle. But thanks to the quick thinking and the efforts of a local hero, there were no casualties. 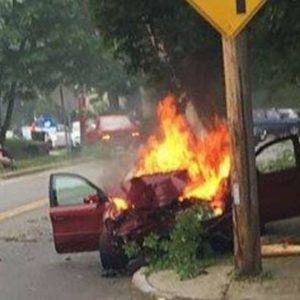 The woman in the car was Laura McCaffrey, who was driving with her niece in Reading, Massachusetts when the tragedy occurred. According to police reports, McCaffrey had a seizure and lost consciousness behind the wheel. That’s when Brandon Finnen reached the crash site and tried to alert the driver. The niece had gotten out but the woman was still inside the car. When he realized that the woman was unconscious her tried to wake her by pounding on the windows. His friend then handed him a baseball bat, which he used to smash open the car window. 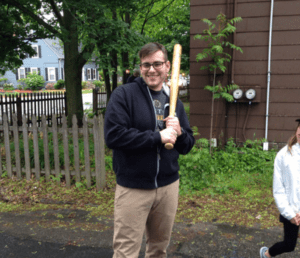 “I unlocked and opened the door,” said Finnen. “The flames got bigger at first and I backed up. Then I thought about how I would feel if I couldn’t get her out. So I just reached in, unbuckled the seat belt, and used all my might to pull her out as strong as I could.” McCaffrey and her niece were then sent to the hospital where they were treated for their injuries. Most of the people who witnessed the incident hail Finnen as a hero who saved the driver’s life.