Fisherman Survives After 9-Foot Shark Jumps on His Boat

Terry Selwood was fishing alone in his boat off the coast of Evans Head, Australia when the most remarkable thing happened. The 73-year old got the shock of his lifeÂ when a 9-foot long shark jumped into his boat and started to thrash inside it, injuring Selwood. Selwood was eventually able to reach the side of the boat and get out of the way of the shark and its massive teeth. 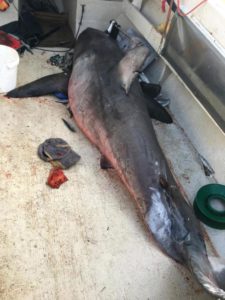 Thankfully, Marine Rescue NSW was alerted to the emergency and they were able to get Selwood safely away from his boat and the unwanted intruder. According to the police report, they had arrived and found Selwood on the side of his 19-foot boat, and he covered in blood with several cuts and scrapes on his right arm. The rescue team was able to bring Selwood into rescue ship where he was airlifted for safety and treatment. The shark was discovered still on the deck of the boat, but it had long since suffocated from being out of water for so long. Rescuers will donate the shark for study and research. 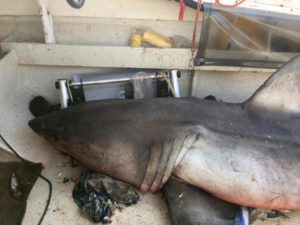 “Thankfully, the fisherman only suffered fright and a number of lacerations which resulted in a few stitches,” Marine Rescue NSW reported. “He now has an amazing survival story of the one that didn’t get away.” It was still was not clear why the shark had decided to breach the surface and jump onÂ Selwood’s boat. Most experts theorize that the shark had probably been caught on one of Selwood’s fishing lines and he was not aware that he had one hell of fish attached on the other end.