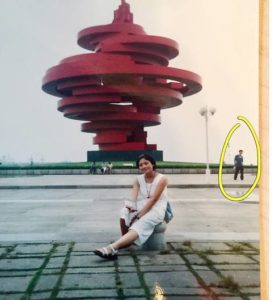 The couple in the photo are Xue and her now-husband Ye. They were both standing several meters apart in July 2000, 11 years before they would even meet each other thousands of miles away. They were both visiting May Fourth Square in the city of Qingdao. Xue was there with her mother who was recovering from surgery and wanted to take a trip. Ye was there was part of a tour group booked by his own mother. The monument commemorates the May 4th movement, which occurred when Chinese students took the streets to protest their country’s treatment at the Treaty of Versailles, which ended the First World War. 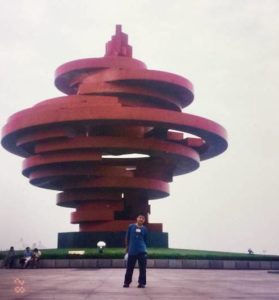 After the photos, both Xue and Ye went their separate ways. It would take a little more than a decade when they would meet and eventually fall in love. They wouldn’t find out about their connection until recently when they both noticed that Yu was captured in the photo of Xue, standing in the background. They both examined both photos and realized that they were at the exact same place at the same time when the pictures were taken.

“When I saw the photo I was taken by surprise and I got goose bumps all over my body,” Ye said. “It seems that Qingdao is certainly one of the most special cities. When the children are older we’ll go to Qingdao again and the family will take another photo.”