In Singapore, Canola the manatee was able to celebrate her third birthday party with jazz music and a vegetable cake. Divers took to the water to present Canola with her cake, and a three piece jazz band played at a party just outside her aquarium. Dozens of school children were invited and attended the special birthday celebration for the marine mammal. 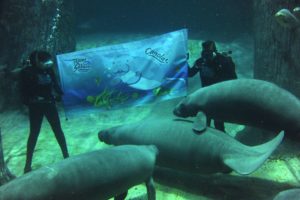 The nearly 700-pound manatee swam around in her large aquarium as she was curious to see what the divers were taking with them. Divers swam in the tank carrying a large cake that was made out of sweet potato leaves and carrots. The cake was topped off with the letter C made from cabbage. The divers carried the cake to Canola as the visitors outside sang her happy birthday. 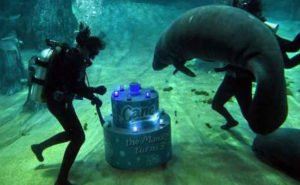 The birthday party was also attended by the dozen other manatees in Canola’s herd. They seemed to enjoy the party, particularly the special birthday cake. Canola the manatee is the official mascot for the River Safari wildlife park in Singapore. Canola was born in the water park but was raised by the staff of the River Safari after she was abandoned by her mother. To recreate the fatty milk produced by manatee mothers, the staff added canola oil to her milk formula, which was how she got her name. Manatees are marine animals with flippers, a flat tail and an egg shaped head. They were what sailors thought to be mermaids in ancient times. Sadly, manatees are an endangered species because of hunting and pollution.