A man from Alberta Canada just broke the record for having the most Marvel Comic tattoos on his body. He currently holds the Guinness Book World Record with 31 different tattoos. The record holder is 36-year old Rick Scolamiero of Edmonton. He has 31 Marvel Comics-themed tattoos all over his body. Most of his body is covered in tattoos, from his neck, all the way to his feet. It started as a plan to get a full tattoo sleeve of his favorite Marvel characters, but it just kept building and building. 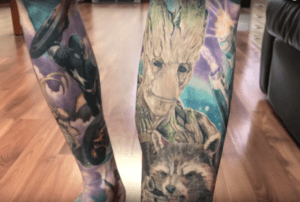 “I fell in love with the artist’s work and wanted to continue to see what else we could come up with regarding tattoos,” Scolamiero said in an interview, “I have been a Marvel comic lover since I was small and growing up we didn’t have much but I always had my Marvel comics and Marvel trading cards. They actually got me through some tough times so the idea of having them on my body forever just really appealed to me.” 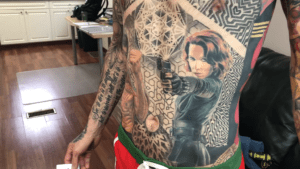 Among the 31 tattoos in his body includes famous characters Wolverine and Spider-man on his forearms, the Guardians of the Galaxy on his left calf, and LEGO Daredevil and Deadpool on his ankles. The biggest so far is one of the Black Widow on his torso. He also has Spider-man 2099 on his left buttocks and Vision of the Avengers on his right buttocks. But his tattoos are not just for characters, he also has the autograph of legendary Marvel scribe Stan Lee tattooed on his wrist.

Scolamiero had one Marvel Comic tattoo inked on his skin per month for the past seven years. In total, he had to endure over 350 hours of tattooing.