Three weeks ago the Boston Globe reported about Christian Ilsley’s quest to grow a giant pumpkin and sail it across the Boston harbor. His goal was to grow a pumpkin large enough to carry him from Jeffries Point in East Boston, to the Fish Pier and then back. It took a couple of weeks, but he was eventually able to grow a big enough pumpkin to use it as a boat. 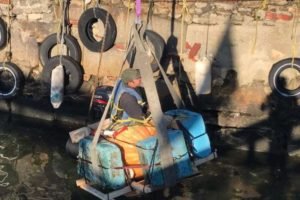 “I just wanted to grow the biggest pumpkin I could in my backyard. But I was just like, ‘All right, I have got to do something with it that’s insane, or fun.’ And I was like, ‘That would be [expletive] amazing if I crossed the harbor â€” in a pumpkin.’â€‰” said 31-year old. The pumpkin grew to 520 pounds before Ilsley hollowed it out and attached a motor to it. The motor was heavy so Ilsley had to attach foam blocks on the sides to keep if balanced and afloat. 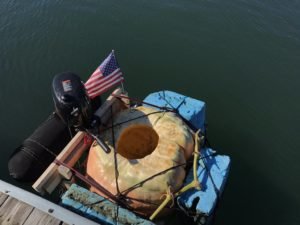 On the morning of Oct. 1, Ilsley lowered his pumpkin on the pier for his journey across the harbor. Ilsley had a fleet of friends behind him following him on their own boats as he crossed the water. Ilsley was only traveling 2 miles per hour but had no issues as he reached the half way point. Ilsley said it was a little nerve-wracking at first, but once he crossed the narrow channel to the Boston Fish Pier, he had the confidence to take it back to the starting point.