Man Proposes to Girlfriend with the Help of Her Favorite Cow

Everyone these days has a unique and romantic way or proposing. So much so that it has become a viral trend to post your proposal and compete with how many likes and views you get. But this one man from Aberdeen may have one of the most unique marriage proposals. He asked his girlfriend to many him by writing the proposal on the side of her favorite cow. 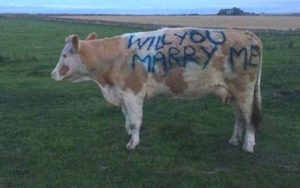 Chris Gospel asked the question to Eilidh Fraser with the help of her favorite cow, Curlytop in Strichen, Aberdeenshire. Gospel said that he went down on one knee after Eilidh read the message on Curlytop. He was hoping that she would overlook the fact that he just wrote on the side of her favorite cow and react to the proposal.

“She was a star. The writing was on the side and as we were walking up she was facing us.” said Gospel, “Eilidh could see something written on the side but not what it was. Curlytop came up to us and then turned. By the time Eilidh read it I was down on one knee and proposed.” 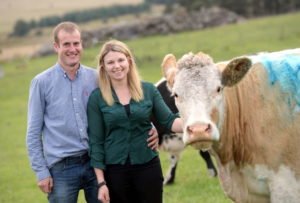 Curlytop is named after the tufts of curly hair on the top of her head. She is also the favorite cow of Eilidh and she is affectionate animal and viewed more like a pet. Eilidh works as a microbiologist in Aberdeen. She says she formed a special bond with the animal and she often even hand feeds the animal.

“She’s a really friendly cow and she would always be very inquisitive. I started off feeding her out of my hand and since then she has been very affectionate. She comes running whenever she sees us.”