Man Proposes To His Girlfriend Before Getting Arrested

In Muskogee, Oklahoma, local police officers had entered the house of Brandon Thompson to arrest him. One of the police officers, Bob Lynch and his partner Lincoln Anderson, had recognized him from arrest warrants and followed him home. Thompson agreed to go peacefully with the police officers but he just one request. He asked the arresting officers if he could first propose to his girlfriend, Leandria Keith who was with them at the time. 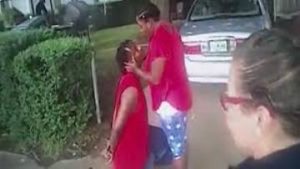 The family was celebrating the 4th of July Independence day, which also happened to be the 35th birthday of Thompson. The police officers entered through the front yard and issued an arrest. They were in the process of detaining Thompson when he made his request. Thankfully, despite being surprised by the request, both arresting officers agreed to let Thompson propose. 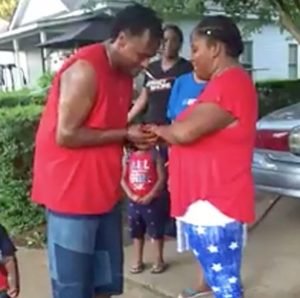 “I asked the officer if I could propose,” said Thompson. “The officer said, ‘You want to do what?’ and I said, ‘I want to propose to her.'” The video of the proposal was captured by one of the police officers body cams. In the video you can see Thompson ask his mother to get him the ring. When she returned with the ring, Thompson got down on one knee and asked Keith for her hand in marriage. Keith said yes, and the officers allowed Thompson to be handcuffed on his front so he could put the ring on his fiancÃ©e.

The couple has been together for more than a year. They said they would be setting the wedding date once Thompson’s legal troubles were taken care of. Thompson said that he was doing the best he could to turn his live around. This includes coaching a pee wee football team and looking for a steady job.