Man Proposes to His Girlfriend in Front of the Pope Francis

There have been many gimmicks and creative ideas when it comes to coming up with a unique and memorable proposal. But when this Argentine man realized that he would be meeting the Pope with his girlfriend, he did not let this opportunity for a once in a lifetime audience slip away. When the time came, he asked permission from the bishop or Rome and the sovereign of the Vatican to help him propose. 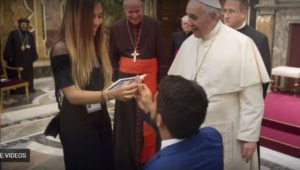 Dario Ramirez is a human rights activist who had a chance to meet the Pope and his staff during a reception for Catholic legislators. He brought his girlfriend Maryangel Espinal with him to meet Pope Francis. When it was their turn to meet the Pope, Ramirez stunned his girlfriend when he dropped on bended knee to propose.

“When we were introduced to the Holy Father, I explained the situation in Venezuela and the situation facing political prisoners,” Ramirez said in an interview, “I then said to the Pope: ‘There’s a third thing I want to ask you.’ I explained to the Holy Father that the woman next to me is the woman of my life. I met her in church, God put her in my life, and I want to propose to her. So I got down on one knee and asked.” 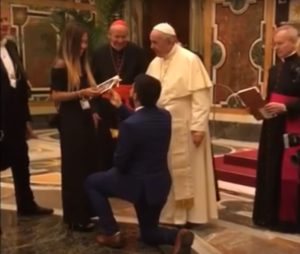 Espinal was initially at a loss for words, which made the Pope ask, “He asked you to marry him, what do you say?” Eventually, Espinal said yes to Ramirez to the cheering of the crowd and a once in a lifetime opportunity to receive a blessing from the Pope.