Some would say that it is never too late to say you’re sorry. This may have been the sentiments of an anonymous man who finally paid an old parking ticket in Minersville, Pennsylvania. It seems that this man had been feeling guilty about an unpaid parking ticket and finally decided to pay up. The only problem was that the ticket was from the 1970’s. 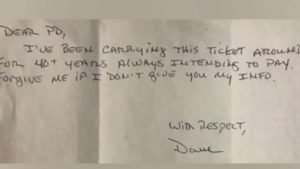 The police department in Minersville received a letter last week from an anonymous man who simply signed off as “Dave”. Inside an envelope was a parking ticket that dated back to 1974, more than 44 years ago. Along with the ticket and the letter, was enough cash to pay for it. The police department has since posted the letter on social media where it quickly went viral.

“Dear PD. I’ve been carrying this ticket around for 40 plus years, always intending to pay. Forgive me if I don’t give you my info. With respect, Dave,” the letter read. The ticket was given in the 70’s meaning it was only two dollars, but the man added another $3 for interest. 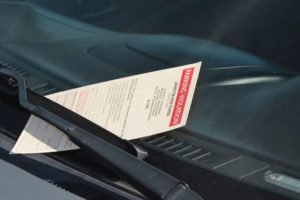 “He paid us five. So, that’s 44 years later, so that only means I made three dollars. I can’t retire on that,” said Chief Michael Combs, “We do appreciate that this individual paid their ticket, and again, we encourage other individuals, if you have an outstanding ticket, please pay them,” Combs said. Combs also added that they would love to track down “Dave” but only to say thank you.