In Northern California, a man by the name of Jerry Ogle had gotten home after being informed that his house was on fire. By the time he got there, there were only ashes left of his house. The house was affected by the Carr Fire and had burned down most of his house to the ground. It was a devastating loss, but he walked through the ruins looking for one special possession; a precious family heirloom. 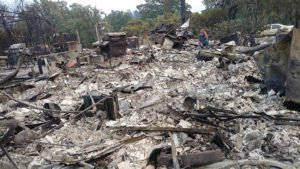 “So after my father and I arrived at what remained of our home off Iron Mountain Road, I started searching for a family heirloom that my grandfather gave me before he passed away. It was my grandmother’s wedding ring. My only real hope was that I would miraculously find the diamond in the ash.” said Ogle.

“After about a half hour of searching the area where I knew I left it, I looked to the sky and asked my grandfather for help. Not 30 seconds later I found the box, the same box that it was given to me in.” reveals Ogle, “And inside the box amongst the ash, there is was, my grandmother’s ring. God is good. Thank you for the help granddad!” 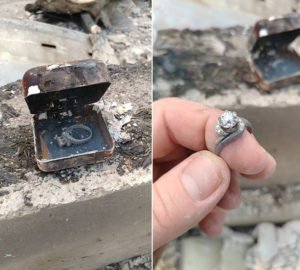 The Carr fires are wildfires that are burning in the Northern California region. It has been cutting across the region since the 23rd of July. The fire has burned over 112,888 acres of land. As of the moment, only 30 percent of the fire is contained. Over 38,000 people have been evacuated because of the wildfire.