Beachfront locations are among the most expensive real estate properties.Â  Marcio Mizael Matolias has found a way to live by the beach and not pay for rent. In fact, he has been doing this for the past 22 years. Matolias has been living inside a sand castle by the beach. His castle houses all his things including his books, his golf clubs, and his fishing poles. 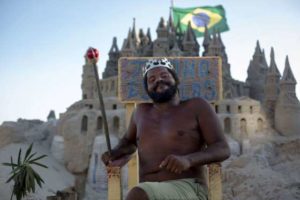 Marcio Mizael Matolias has been living in a castle on the beach of Barra da Tijuca in Rio de Janeiro, Brazil. It’s only appropriate that a man who lives in a castle is called “The King” by his friends and neighbors. In fact, Matolias has become a tourist attraction in his own right. People from all over the world are curious to see the man that lives in a sand castle by the beach in Brazil.

“I grew up in the Bay of Guanabara, I always lived on the beach. People pay exorbitant rents to live in front of the sea â€“ I do not have bills, and here I have a good life.” 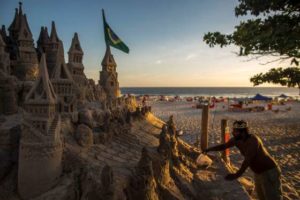 Being able to live by the beach in Rio de Janeiro without paying rent has been almost impossible, especially in recent years. There has been gentrification in the city and luxury apartments are being collected by the wealthy. The real estate next to the beaches is so valuable that neighboring favelas are constantly fighting against being evicted, removed or dispossessed. But this isn’t a problem for the King. He isn’t even worried about weather collapsing his castle. He simply moves to another stretch on the beach and builds another castle.