Man has been Collecting Currencies of the World for 36 Years

A Serb by the name of Zoran Milosevic has been collecting banknotes and coins from all over the world. Despite his humble beginnings at the small village of Pavlovci, just 40 miles west of Belgrade, he has been able to collect the currencies of places thousands of miles away. What makes this remarkable is that he rarely leaves the country. Milosevic works as a locksmith in his home town, but his real passion is to collect all the currencies in the world. 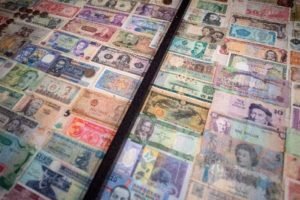 In his home, Milosevic shows off his work with a colorful array of currencies under a protective glass case. The latest addition to his collection is a coin from Bermuda. Milosevic says he managed to collect 194 different currencies, including those that are no longer in circulation. He has relied on his friends who have gone on vacation to other places in the world, as well as friends that live in different parts.Â  In some rare cases, he has had to buy currency and had it sent through the mail. 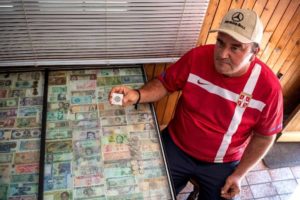 It took him 36 years and his collection of world currencies is almost complete. The only missing piece is one currency: Â the Solomon Islands dollar. The coins and notes form the island has proven to be elusive. The Solomon Islands are a group of islands off Australia and is around 10,000 miles away from Serbia. But Zoran is confident that he will be able to complete his collection.

“My goal is to demonstrate how small the world is because you can lock it (all the currencies) in a box of 1.5 m2 (11 square feet),” said Milosevic, “It would prove what can be done by human perseverance.”