Giant Baby Jumps out of a Box in Gender Reveal Party

Earlier this week, a couple held a unique gender-reveal party when they had giant baby jump out of a box. The party was held by Yessenia and Eric from Houston, Texas. They wanted to reveal the gender of their baby to their family and friends during the Labor Day Weekend. According to Yessenia, her husband was hesitant to throw a gender reveal party but she eventually convinced him. 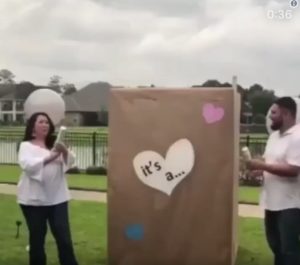 “He gave it some thought and decided that if we were going to do it we would have to think outside the box,” she said, “He wanted his brother, Chris, to pop out of a box wearing a giant diaper and I thought the whole baby costume would be even better.” Yessenia also said that no one expected a giant baby to jump out of the box.

“The people at the reveal party were all shocked when the giant baby came out,” she said. “Some of them expected balloons or something of that nature but never a dancing giant baby. They loved it and thought it was hilarious.” 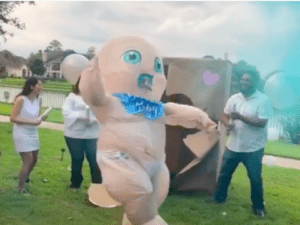 “We never in a million years expected our video to go viral,” Yessenia said. “I decided to share it on my social media accounts for my friends and family to see and going viral never even crossed my mind. It’s been a little crazy and funny to know that a viral video is actually my video. It will definitely be a cool story to tell our little one once he is older.”