Man Gives His Boots To Homeless Person on the Subway

A woman in Chicago named Jessica Bell was in riding the subway last week, when she witnessed an act of kindness that brought tears to her eyes. She was in a train car with a homeless man when an anonymous stranger gave him his boots off of his own two feet. She shared the entire experience on her Facebook account. 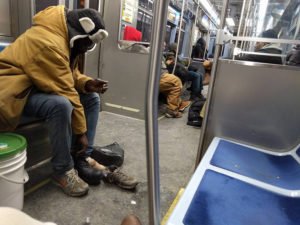 “So I’m headed home on the CTA Redline and there’s a homeless man sitting across from me. He’s older, weathered, minding his own business. His feet are so swollen he’s wearing the tattered gym shoes he has with the back folded down, like slip-ons. I don’t know how many pairs of socks he’s wearing in an attempt to keep his feet warm but there blood is seeping through,” Jessica Bell wrote.

“There’s another man on the other side of the doors; he’s younger, carrying a satchel and a suitcase, also minding his own business. He’s wearing a pair of big black snow boots. They look new; they look expensive; they’re built for a Chicago winter. Quietly, in a blink and you’ll miss it fashion, the younger man takes off the boots he’s wearing and passes them to the old man. He opens his suitcase and gives him a pair of socks as well.” continued Jessica. 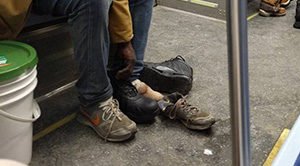 “The young man puts on a spare pair of shoes from the suitcase. These shoes are nice too, but not as nice as the boots. They would have fit the old man just as well, but they were not what this old man needed. He tells the old man to try and clean his feet and to make sure he changes into the new socks as soon as he can and then the young man gets off at 87th. Those of us who are close enough to see and hear the exchange are floored.”

“I love that in a time and place where hate and apathy are rampant, quiet compassion appears without warning.” says Bell.