Man Finds Himself in Childhood Family Photo of Fiancée

Some people believe that soul mates will cross paths at least once in their lives before they actually meet. People believe that this is destiny trying to put couples together. But for this couple, they can actually tell when this happened in their lives, and they can even prove it with photographic evidence. A man was looking at a childhood family photo of his fiancÃ©, when he saw himself swimming in the background. 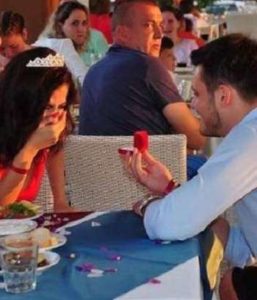 Verona Koliqi, originally from Kosovo, was vacationing with her family in Montenegro when she was just a child when the photo was taken. Years later, when her fiancÃ© Mirand Buzaku looked at the picture in her childhood home, he noticed a boy in a floatation device in the background. After looking more closely, he was convinced that the little boy in the photo was him. It seems that years before they even met, they couple went on the same holiday, at the same place, went to the same beach, and was amazingly photographed at the same time. 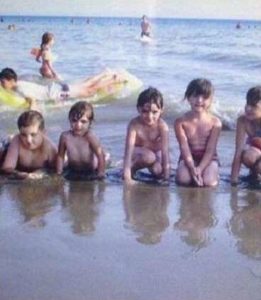 “He noticed the kid in the back had the same shirt, shorts and floaty as him,” Koliqi said. “We analyzed further and confirmed with family members that it’s him photo-bombing my family photo.” The couple was amazed at the coincidence at first, but after talking to Buzaku’s family, they confirmed that they were indeed in the same place when the picture was taken. The story of this couple and their photo was shared on Koliqi’s social media, where it quickly went viral. Currently, there are more than 30,000 likes and shares of the post. Some people have even taken to sharing their own destiny stories.