Man Fills In For Girlfriend in Maternity Shoot

Earlier this week, a man’s photos went viral news when he filled in for his girlfriend who could not show up for a “maternity” photo shoot. When the man realized that his girlfriend was not going to be available on the day that he booked the photographer, he decided to become the model rather than have an entire day wasted for the location and the hired photographer. The location was set in rocky area near a beach. Roberts wasn’t dressed for a photo shoot and simply unbuttoned his shirt to reveal his own” baby bump”. 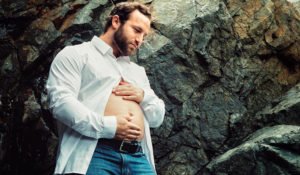 “My girlfriend was supposed to have maternity photos taken one day, but she forgot and made other plansâ€”so the photographer did them with me instead,” said Nick Roberts, “I felt it was only right to at least try to look a little pregnant, so we grabbed some McDonald’s and off we were.” The pictures of Roberts posing like a pregnant woman were very funny and quickly spread on the internet. What made the photos even more hilarious was his “baby bump” of a stomach and his props, which basically consisted of fast food bags and items. 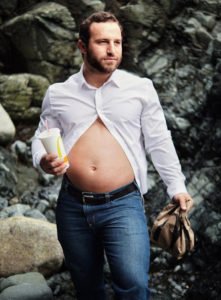 “If I’m being completely honest, the setting, the occasion, the awful cramps from the double cheeseburgers… it all brought me so much closer to the pregnancy. I’ll never know what being in labor feels like, but I feel in my heart, it can’t be too far away from eating A LOT of fast food. I’m truly blessed to have had this eye-opening experience.”