When a man from Dixon Illinois saw a driver of a moving vehicle having a seizure, he did not hesitate to dive through an open window and save him. The man named Randy Tompkins is now being hailed a hero and a little bit of an athlete for the move that he pulled. The seizing driver could have hit bystanders, or worse, hit oncoming traffic that would have caused a pile up. The entire scene was captured on videotape and has since gone viral. 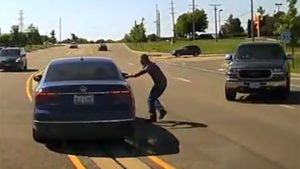 The incident occurred earlier this week when 39-year old Tompkins noticed a car headed towards himÂ on the wrong side of the road. The slow moving car then swerved into traffic and almost hit a few vehicles. Then Tompkins, who was parked nearby, ran across the street and dove headfirst into the open passenger side window. Once Tompkins was in the car, he shifted the car into park and placed two fingers in the driver’s mouth to prevent him from choking on his own tongue.

“I just noticed, I watched him pull out behind the two cars,” said Tompkins, “He was approaching the intersection, and I could tell he was having a seizure then. I waited because I didn’t know if he was going to jerk the wheel or push the gas and that’s why I did what I did. As soon as I saw he was having a seizure I just knew I was going to help.” Police officers who had responded to the scene then called for paramedics. Tompkins waited with the police until the paramedics arrived to take the driver to the nearest hospital.