In Etobicoke, Ontario, a retired mechanic named Adi Asti took matters into his own hands when he built a set of stairs for the local community park. It all started when several of his neighbors fell down a steep path that led to the community garden in Tom Riley Park. The community asked the city to build steps, but the city of Toronto had estimated that the price of the stairs would cost $65,000 to $150,000. So Asti built the staircase for a little over $500. 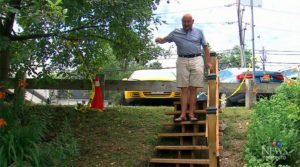 When Asti first heard about the estimated price for the stairs, he thought that the city wanted to build an escalator. When he realized that they were just planning to build regular steps, he decided to do the job himself. Asti hired a homeless person to help him build the steps by themselves using wooden planks and everyday tools. They were able to build eight steps in a matter of hours with a budget that totaled $550. 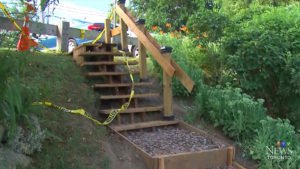 “To me, the safety of people is more important than money,” Astl said. “So if the city is not willing to do it, I have to do it myself.” When city officials found out about the steps that Asti built, they sent city officers to tape off the set of stairs. The city said that they would make a decision soon on what to do with it, and if it was safe enough to use. On the bright side of things, Asti has not been charged with any violation, aside from using his common sense.