Man Breaks Record for Swimming in a Sack

Earlier this week, 64-year old Bulgarian Yane Petkov reclaimed the Guinness World Record for swimming with his hands and feet tied and wrapped inside a sack. The senior citizen swam more than three kilometers at Lake Ohrid in Macedonia. He beat the record of Indian Fisherman Gopal Kharvi who swam 3,071 meters in the Indian Ocean. 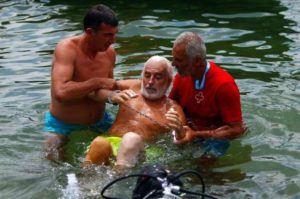 Yane Petkov is a swimming instructor and a lifeguard. But he is most known for his escape routines and record breaking swimming attempts. The swimmer had previously held the record for swimming in a sack with 2,000 meters until KharviÂ  broke his record in 2013. But earlier this week, Petkov set out to reclaim his old record. Petkov only held the record for three months before it was broken.

Petkov was able to regain his record in his latest attempt. He was planning to swim 3.5 kilometers with Guinness Records representatives present to observe his swim. The attempt was organized by the Red Cross and the water sports club of Ohrid and Petric. Petkov took three hours to swim along the lake. He swam face up with his feet first. Eventually he was able to emerge from the water on the shore on the other side. 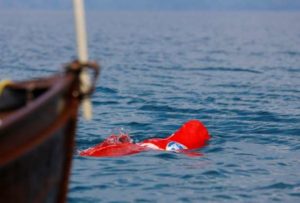 Petkov had to use technique similar to a worm going through dirt to cover the distance. Swimming is difficult enough with your hands and feet tied together, but being inside a sack made it even more challenging. Emergency personnel were on hand to help in case Petkov had trouble staying afloat. If he had a cramp of went under suddenly, the team would only have minutes to rescue the 64-year old before he drowned.