Man Breaks Record for Slicing Watermelons on His Stomach

Earlier this week, a New Yorker named Ashrita Furman broke the Guinness World Book record for having the most watermelons sliced on top of his stomach in just 60 seconds. Furman is actually very familiar with the Guinness Book, having set several world records in the past few years. But his most recent one has recently gone viral with the record breaking feat being shared on social media. 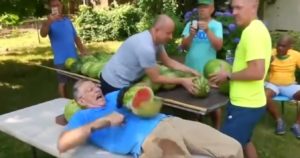 Furman himself came up with this latest idea to break a new world record. He didn’t have any competition for the title, but Guinness said that he had to slice at least 20 watermelons to get recognized for his feat. He managed to cut through 26 watermelons with his own katana in less than a minute. Even more amazing, he managed to walk away without a scratch despite using his stomach for a chopping board.

“I’m really thrilled,” Furman said after breaking the record, “My first reaction is I’m relieved that I didn’t kill myself and the second is that I’m exhilarated because it is not only a skillful record, but also it’s something that I invented and now it’s out there and other people can challenge it.” 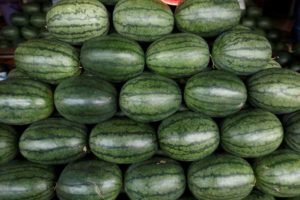 Fuman has been dubbed “Mr. Versatility” because of the many amazing things that he is able to do. This allowed him to break and hold more than 200 Guinness Book World records. His first record breaking feat was completing 27,000 jumping jacks, which he set in 1979. Other records include most knives caught in a minute (54) and the most grapes caught in his mouth in one minute (86). Despite his advanced age, he doesn’t plan on slowing down and he keeps looking for more records to break.