In January of 2016, the director of the Mali Elephant Project predicted that all of the elephants in Mali would be killed in just three years if the poaching in the area was not stopped. To prevent this from happening, the Mali government formed an anti-poaching brigade to protect the 300 or so elephants that lived in their borders.

The elephant brigade was made up of a combination of army forces and rangers. It was a partnership that was necessary for protecting wildlife in such a hostile territory. Since the brigade was deployed in Mali over nine months ago, not a single elephant has been taken by poachers. The leader of the brigade was an army-ranger brigade brought in by a co-founder of Changeta Wildlife, Rory Young. Chengeta Wildlife is an organization that trains and supports anti-poaching operations.

Young was able to form a team through special training that included traditional techniques for operating in the bush and protecting the animals. As additional support, the brigade had Bobby and Mitch, two chocolate-colored spaniels who have been trained to smell out ivory during the brigade’s search missions. The brigade would often take the dogs when they are hinting for intelligence about the hideouts of poachers. 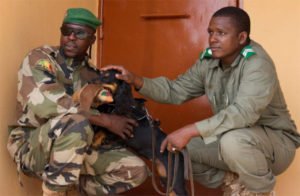 Most of the rangers that have joined the brigade believe in their cause and the importance of the elephants in Mali’s heritage. In fact, most of them had never even seen an elephant before joining the brigade. Now many of them consider these elephants as one of the greatest animals they have ever seen. This passion and love for them is what makes their work so special and effective.