Make Up Artists Recreates Famous Paintings on her Face

A 20-year old makeup artist named Pamela Tellez Coria is creating uproar online because of her art pieces of famous paintings and scenes that she recreates on her face. This makeup artist and social media star started when she was 14 and she has been doing this kind of art for years. Most of her work involves recreating classic artwork with makeup with herself as the model. Several of her creations have already gone viral and her social media account has several followers already. 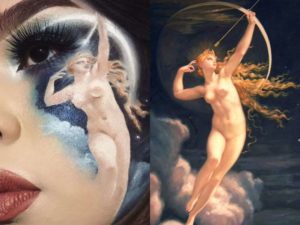 This Atlanta native started makeup art after she was trying out the makeup of her mother as a young teenager. She perfected traditional makeup then moved on to making eye portraits. Eventually she started to recreate her favorite classic paintings on her face. Her amazing work has lead to thousands of followers on her Instagram and twitter accounts. Coria says her designs are inspired by famous paintings, artists, and photographs. It takes her around three to four hours to make each of her art pieces. 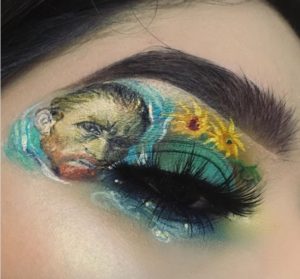 “Growing up I dedicated a lot of my time to sketching and painting,” Coria said. “Once I graduated high school and took makeup seriously, I incorporated my talent into it.” Coria also said that she used normal makeup brushes to create her artwork, but she also uses paint brushes for the finer details of some of her work. Among her favorite creations are the ones of Frida Kahlo’s “Autorretrato con Collar de Espinas.” She also loves her art pieces inspired by painter Vincent van Gogh.

“Frida has always been an inspiration to me growing up,” Coria said. “She was the only artist I knew that I could relate to, being that we’re both female Mexican artists.”