High school senior Sabrina Loughman didn’t expect to go to the prom with a date. It was partly because she had no one to go with and her expectations were low because she had Down syndrome. But then to her surprise, one of the most popular boys in school, Stephen Kurisco, asked her if she would like to go with him to the big event. 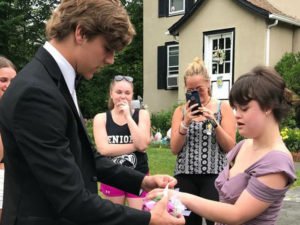 It all started when Sabrina’s big sister Samantha, was talking on the phone with Victoria, the sister of Stephen. Stephen was a football and lacrosse player at the high school. Victoria asked if Stephen would like to go to the prom with Sabrina. He didn’t hesitate and said yes. Sabrina never thought that she would go to the prom with a handsome young man from her high school, but thanks to these three kids, she got that chance. 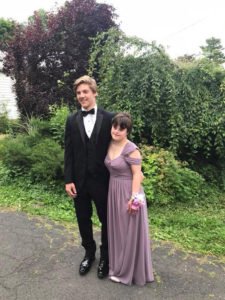 “Sabrina is a great kid,” said Cathy Hunt, Sabrina’s mother, “I just think it’s a pretty amazing thing for her self esteem for her to be able to walk in with this boy.” Sabrina’s mom also wanted to acknowledge Stephen for his simple act of kindness. She says it may not seem like much, but it matters a lot to Sabrina, and it is something that she will never forget.

“That’s what I tell my kids. ‘Money and everything is wonderful but I just want you to be good people’,” Hunt said. “People don’t put enough emphasis on kindness and empathy. That is exactly why I wanted Stephen to be recognized.”