Maid of Honor Attends Sisters’ Wedding with a Robot

Anna Halperin-Salmon was devastated when her sister Elizabeth Dubow, found out that she was pregnant. It wasn’t that she wasn’t happy for her. It was because this meant that she would not be able to attend her sister’s wedding as the maid of honor. But thanks to an unusual yet ingenious idea, Elizabeth was still able to go to the wedding, despite being home at a different state. 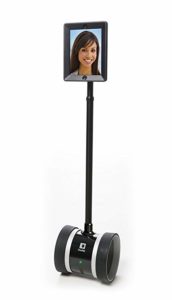 “I found out this past January that she wasn’t going to make it,” Halperin-Salmon said. “There was always a small hope that the baby would come early, but it became clear around February that it wouldn’t be possible so we started brainstorming other ideas.” Anna and her husband Ian tried to come up with ways for Elizabeth to attend the wedding. They thought about using a projector or maybe even using a drone.

Then a friend recommended using a robot by Double Robotics. The robot is essentially an iPad attached to a Segway. The movements of the robot are controlled by the person. And his/her face is projected on the iPad. The robot was rented out for the wedding. Thanks to the contraption, Elizabeth was able to attend the wedding. She even attended the couple’s rehearsal dinner to test out the robot. 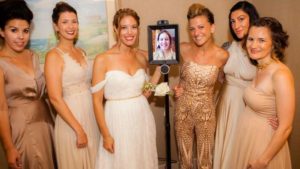 “She hung out at the rehearsal dinner and chatted with everyone,” Salmon said. “She hung out with the bridesmaids on the morning of.” Thanks to the robot Elizabeth was able to “walk” down the aisle, give a speech on the stage, and she even managed to spin a few times on the dance floor.