A couple in Essex that won lottery created a Champagne themed garden in their backyard. The lucky couple won £3 million on a scratch card lottery ticket. They have now been spending the past week mowing a design of a champagne bottle spilling into two glasses into their lawn as celebration. The beauty of the garden can be appreciated from an aerial view. 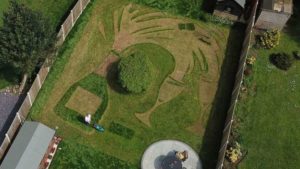 58-year old Barry Maddox and his partner 51-year old Sue Richards won the prize two years ago and purchased their dream home in Billericay, Essex. One of the first things they changed in their new property was to add an intricate design of a champagne bottle into their garden. The garden previously had Wimbledon stripes and checker boards as designs.

The project took three days of work as a well as advice from a garden expert that they simply refer to as “Mr. Lawn”. Maddox and Mr. Lawn cut the design themselves with all sorts of shears and scissors, and with a normal lawn mower. 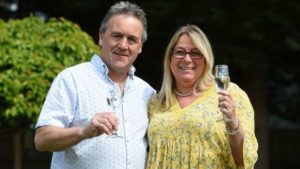 “It’s bigger than what I expected but it’s amazing,” said Ms Richards. “It’s come out really nice. Neighbors can see it as we’re in a converted bungalow and there are two-storey houses next door. I wouldn’t be surprised if the neighbors beyond that have seen it.”

It was Sue Richards that bought the winning scratch card. She bought the ticket just as she was coming home from work as a care worker. Despite the fortune, Richards still works. They bought the large mansion and spent the rest of the money on their five children. But they also splurged a little bit, with Richards purchasing four Audis and a motor home.