Spruce the penguin is looking for a partner in life. As a Humboldt Penguin, finding a pair is one of the most important parts of life. Unfortunately for Spruce, he is having a hard time finding a mate of his own. Spruce currently lives at the Weymouth Sea Life Adventure Park in the United Kingdom. Spruce is one of 13 penguins that live in the park. 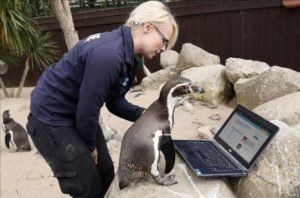 Sadly, all 12 penguins that live with Spruce have paired up as couples, leaving Spruce as the odd penguin out. Another problem with this situation is that penguins have the same mate for life, leaving no opening for Spruce at the park. The keepers of the park have noticed this and wanted to help Spruce in his quest for love. One of the ways that they were able to help was by providing him with an online profile on the dating site Plenty of Fish. Spruce is just one year old, but he’s a terrific swimmer, he’s in perfect shape, and he’s looking to settle down with a mate and have some kids. According to his online profile, Spruce is fan of Batman, his favorite band is Reel Big Fish, and he enjoys seafood. 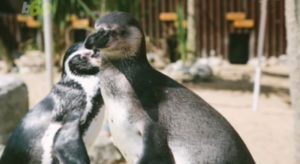 “Plenty of Fish has been really useful as a means of putting information about Spruce online so I can share the link on social media and send it to other penguin carers around the world,” says penguin keeper Sarah. There are only 10,000 pairs of Humboldt penguins in the wild, with most of them found in the coastal parts of Peru and Chile. Several factors including overpopulation and pollution have made these penguins an endangered species.