Bride Brings WWII Veteran To Be Her Something Blue

When it comes to weddings, each culture and each family has its own traditions and customs. One of the most common and most traditional has been adding “something, something new, something borrowed, and something blue”. And for bride Alison Ferrell, she had something particularly special for her “something blue” in her upcoming wedding. Before the ceremony, she announced that her 92-year old uncle would be her something blue. 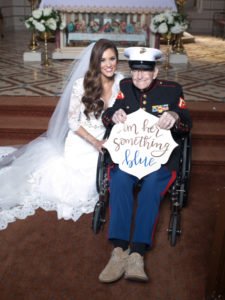 Ferrell’s uncle was Bill Lee Eblen, a veteran of two wars, World War II, and the Korean War. Eblen was wearing his full dress uniform and came down the aisle carrying a sign that said “I’m her something blue.” The Army formal wear is commonly known by soldiers as their blues, so it made perfect sense that Eblen would be chosen as the blue memento for the wedding. Despite being strong for his age, Eblen still required the use of a wheelchair when it was his time to come down the aisle. 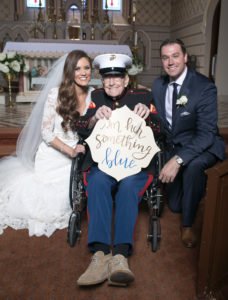 “It meant everything to me that he was there as my something blue,” said Ferrell at her wedding, “I come from a family where we have great respect and admiration for those in the armed services, so having him there in his blues was perfect. I knew I wanted to honor him in a special way,” Ferrell explained. “We are a large, close-knit family and he has always been at every special moment in my life. So of course my wedding was no different. It made me happy to see him happy.”