Fionn Crimmins is the biggest fan of the Maryland Terps, a men’s Lacrosse Team. He is such a fanÂ that he attends all their games, and even threw a birthday party with the Maryland colors as his theme. Fionn has Acute Lymphoblastic Leukemia, but that hasn’t stopped him from completely supporting the Terps. Fionn and his dad will travel to Boston to watch the Terps. If the team wins, he can witness his favorite team make it to the championship match. 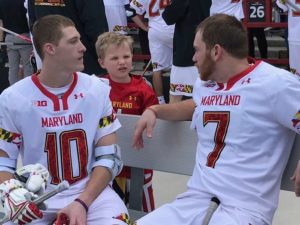 The lacrosse team is very much aware of little Fionn and the love that he has for the team. In 2015, after he was introduced to the team thanks to a charity organization, they made Crimmins into an honorary member of the team. Fionn and his father Conor attend as many games as they can, but most of their time is spent in home games and in the locker room, where Fionn has bonded with several of the players, and even the coaching staff. When Fionn lost his hair due to chemotherapy, many players shaved their head in solidarity. 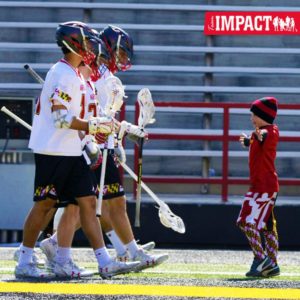 “We really feel like he’s a part of our team,” said John Tillman, the head coach of the lacrosse team, “The guys love seeing him and having him around. He’s developed some really strong relationships. Our team is better when he’s here and when he’s part of it. Just his energy, his passion, his joy that he brings is special. I know he always makes the guys smile and I think it does give us a lift.”