In a recent video that has gone viral, a London runner is seen stopping from crossing the finish line to help another racer who seemed to be too exhausted to see where he was going. The video shows Matthew Rees stop running and head towards another runner, an amateur named Davit Wyeth. It seems Wyeth had collapsed a mere 200 yards from the finish line. After a few more moments, another man appeared and stepped in to help David finish the end of the race. 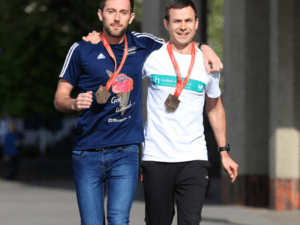 35-year old David Wyeth had entered the London Marathon in honor of his uncle, who had passed away a year earlier. But just as he was about to finish the race, Wyeth collapsed from exhaustion. That’s when 29-year old Rees saw that Wyeth had collapsed and sacrificed his own race to help him get up and finish the race. The second man that assisted Wyeth turned out to be an official of the London marathon. 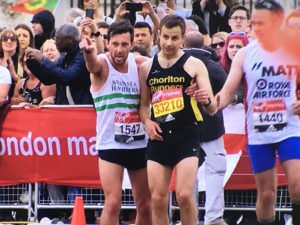 “I came round the final corner and I saw a runner struggling, his legs were collapsing beneath him. Every time he tried to get up, he kept on falling back to the ground.” Rees told BBC. Rees also added that he initially wanted to help Wyeth stand up so he could finish the race, but he soon realized that Wyeth needed help to continue, so instead of finishing the race, he went over to Wyath to walk with him to the finish line. One thing is clear, no matter who stepped on the finish line first, there was no loser between these two runners.