In Birmingham, a 7-year old girl named Anu was nervous as she approached her classmates one day. This was because she was going to reveal to her friends her new blade prosthetic leg. The new blade design is the best option for active and sporty activities, which kids tend to do. Not only did Anu get a new prosthetic for more sporty activities, but she was also able to have it in her favorite color: pink. 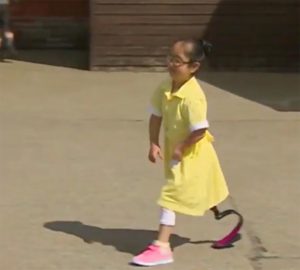 In the viral video, a classmate is seen to give Anu a heartwarming hug after she reveals to them her new leg. One even cries out in amazement while another girl is curious about the details of her new pink prosthetic. Anu and her friends then test out the new leg by running around while holding hands. Anu lost her leg at birth when it was amputated because of a condition. Anu has been using a prosthetic all her life. 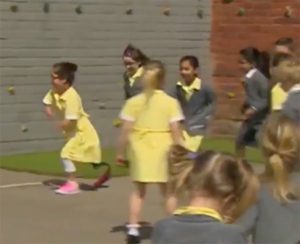 A blade prosthetic is actually a very expensive prosthetic that is usually only worn by athletes for competitions. But it was made possible thanks to $1.9 million allocated by the National Health Service program in the UK to give 500 children running blades for schools sports. A blade prosthetic costs around $3,000 to $6,000 and has to be changed every 2-3 years, or even more often for growing children. The blade prosthetic not only made Anu a popular girl at school that day, it also gave her a chance to participate in athletic sports and activities.