Little Girl Asks Police to Check her House for Monsters

In Colorado, Officer David Bonday of the Longmont Police Department was called to check out the Fahrenbruch’s home earlier this week. Officer Bonday had committed to launching a thorough investigation on the possibility of monsters lurking in the house. Officer Bonday was also more than happy receive the help of little Sidney Fahrenbruch as a partner. 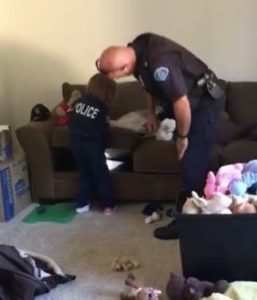 This all started when the Fahrenbruch family met Officer Bonday at a community barbecue event with the local police department. The event was thrown for the family before they moved into their new home. When Bonday arrived for the first day of the “inspection”, Sidney was there to help him out through the house. She even had her own police uniform to go on duty. 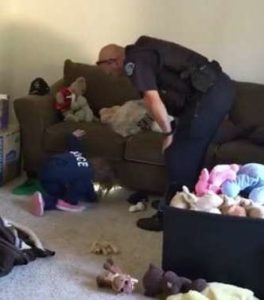 “He loved her the first time he met her because she was wearing her police outfit,” said Sidney mother. “She instantly gravitated toward him. That’s when she asked him if he’d come check her new house for monsters. They searched the whole house, top to bottom. They went to town. They looked in every closet, every bathroom and every room to make sure there were none.”

“It was cute to say the least,” said Officer Bonday told InsideEdition.com. “I’ve never had anyone ask me to check for monsters before.” Bonday and his little assistant searched the house with a flashlight, but after their investigation, they concluded that the perimeter was secure. Sidney’s mother believes that she does not really believe that there are monsters, but that she enjoyed spending time with the police officer.