In Tanzania, photos of a wild mother lioness nursing a baby leopard have gone viral. It is the first time that interspecies suckling has been captured in photographs. This sort of thing does not usually occur in the wild, and it even rarer to capture it on film. Lionesses are likely to kill babies of a different species, but in this case, the mother had taken in the cub as her own. 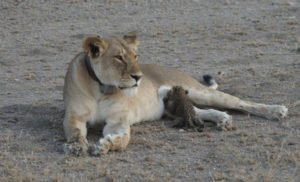 The lioness is 5-year old named Nosikitok. It was reclining on the grass and nursing a few cubs when a conservation group made up of researchers observed that her cub was of a different species. The lioness was wearing a GPS collar, which allowed researchers to track her. One of the researchers believed that she may have lost her cubs and in that moment of vulnerability and maternity, she allowed the baby leopard to approach her and feed. The cub may have also lost her mother. leading it to the mother lion. 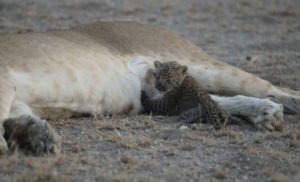 But even if this pairing is one of a kind and very adorable, there is tough road ahead for the cub. Lion prides are very social creatures and distinguish each other by their roars and looks. Even if this lioness has taken this cub as her own, it is unlikely that the other lions will do the same. Other lions, especially male lions, are very territorial with their mates and their own cubs and will kill any competition. The only chance that his cub has is if it reaches maturity safely in 12 to 18 months. Leopards are solitary hunters and at that age, the leopard cub will leave the pride and hunt on her own.