When it comes to exciting and thrilling jobs, the title of librarian is probably last of the list. But don’t tell that to this group of librarians. After seeing the latest Kardashian family photo on the cover of the latest Hollywood Reporter, the librarians at the Invercargill City Libraries decided to recreate it, with their own flavor and style. The result is a hilarious photo that has gone viral since being posted on their social media page. 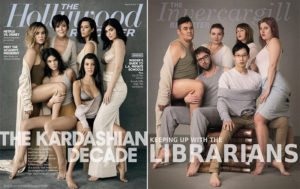 “It has been 10 years since the Kardashians first graced our screens,” the staff of Invercargill City Libraries wrote on their Facebook post. “To celebrate, our social media team decided to have a totally impromptu, definitely not planned, photo-shoot.” The post has gotten lot of likes and shares on Facebook, but there are also those that have trolled the staff for the picture. 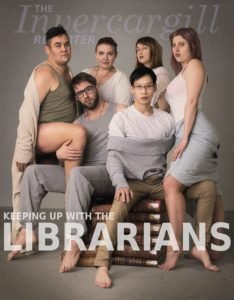 One of Facebook user questioned how the people were idiotic for posting a picture on a library social media page. They responded with:“Actually, the 6 of us do social media on top of our actual jobs. We aren’t hired to do it all. We do it because we love our library and we don’t think that’s idiotic at all.” The post has received more than 10,000 likes of Facebook.

The Kardashians are one of the most popular reality TV families in television. The five sisters and their mother have been among the most talked about celebrities in recent years. Their show “Keeping up with the Kardashians” has been a hit TV show being watched by millions worldwide. The title of the show was the basis for the spoof headline of “Keeping up with the Librarians”.