After Delay at Airport, Airline Passenger Sings with Airport Intercom

We all know the misery and despair that comes along with long delays at the airport. If we are lucky, we only have to suffer a few minutes of waiting. But for some, they have to wait hours upon hours to board their plane. The monotony and boredom can be hard to battle, especially in a place like an airport where people are either tired and/or cranky. But for this passenger, he decided to take things into his own hands and entertain himself and the other people at the terminal. 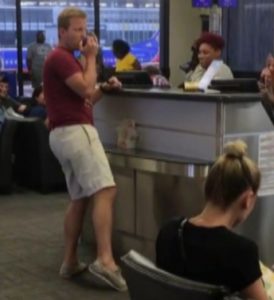 A passenger in Louisiana recently took over an airport intercom and suddenly broke into song to bring entertainment and amusement to his fellow passengers. The unidentified man was among the many passengers waiting for their flight at the Louis Armstrong Airport in New Orleans, when he decided to break the silence with a few choice songs. While his singing did not make the delay go faster, it was a welcome distraction to the bored people at the terminal. 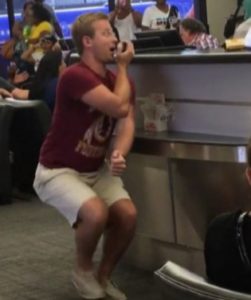 The man starts off with his own rendition of the Oasis song “Wonderwall” to much hilarity. Then he showed off his vocals and range by singing “No Diggity” by Blackstreet. The singer was not just singing, he also started to dance and shimmy around to the delight of his audience. Not only did he receive a few cheers and a lot of laughs, but he even got a few passengers, and some of the crew, to join in his singing, especially during the chorus of No Diggity. A video of the incident was posted on social media and has gone viral. The video has been seen more than 15 million times on Facebook.