Earlier this week, the toy brick company LEGO built a working life-size Bugatti supercar using their Technic pieces. The project was partly a passion project with LEGO’s creative team, but it is also as promotion to show off their company during the Italian Grand Prix. The model’s body was made entirely with LEGO parts and was counted at over a million Technic LEGO pieces. 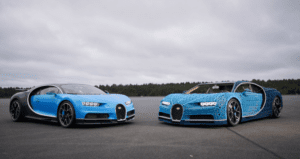 Technic Pieces are the company’s line of special bricks made up of interconnecting rods, gears, motors, and other parts that are more complex then the generic bricks that LEGO is known for. According to the company, the building process took a little over 13,000 hours of man power. The idea was conceptualized in June of last year and construction began on March of this year. 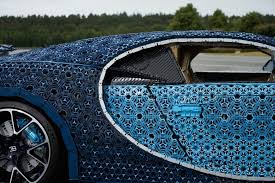 The working car is not made entirely of LEGO; that would be impractical. There are components that cannot be made up of plastic when building a working automobile. There the steel frame and chassis, the batteries, engine parts, and of course, the wheels. The car features a detachable steering wheel, fully functioning car doors, and a spoiler that lifts and lowers at the push of a button. There is also a working control panel to toggle all the lights and electronics, such as a speedometer.

The car was modeled after the Bugatti Chiron, one of the fastest and strongest supercars today. THe car model is known by its signature blue and black colors. Lego will be showing the model in person at the Italian Grand Prix in Monza, Italy.