Largest Heart Ever Put On Display in Toronto

Earlier this week, the largest heart ever to be recorded was displayed at Toronto’s Royal Ontario Museum. The heart will give visitors a chance to view such a rare biological sight. The heart belonged to a blue whale, whose carcass washed up on the shores of Trout River in Newfoundland and Labrador province almost three years ago. The heart was first shipped to Germany, where it underwent plastination to preserve the organ.

The heart of the blue whale measures at 5 feet by 4 feet by 4 feet and weighed at least 400 pounds before it was removed from the carcass. Blue whale carcasses are rarely found as they usually sink to the bottom of the ocean for having less blubber and fat than other species of whale. The blue carcass found in Newfoundland was one of two blue whales that washed up on the shore three years ago. 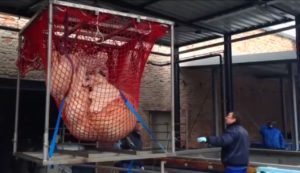 “Some dinosaurs, like sauropods, are longer but by weight the blue whale is the heaviest animal that has ever lived on earth and of course its heart is the biggest heart,” said Burton Lim, Assistant Curator of Mammalogy at the museum. The blue whale is the largest animal known to have existed, being even larger than any other dinosaur. The Blue Whale’s diet is primarily made up of small crustaceans known as krill. The whale was almost hunted to extinction until they were protected worldwide in 1966. Since then, the Blue whale was able to recover and their numbers are almost as high as before the whaling crisis.