Recently, a baby cow that was born in a Texas ranch has been made an internet sensation because of how it looks. A picture of the black and white calf clearly shows how it looks like rock star Gene Simmons of the heavy metal band KISS. The picture was shared on social media by the Hill County Visitor website. The calf was named Genie after its lookalike, and is known to stick its tongue out like its human doppelganger. 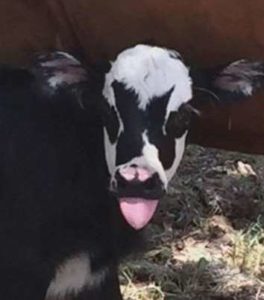 Drew Taylor, who runs the Hill County Visitor tourism website posted the photo on his social media account where a friend forwarded it to Simmons himself. The picture got the attention of the bassist and singer, where he posted the picture of the calf on his own twitter account. “This is real, folks!!!” said the KISS rocker. The owner of the steakhouse that owns Genie says that they will not be placing the rare cow on the menu. 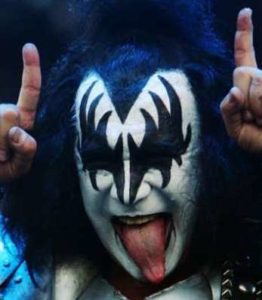 “Now obviously, we can’t serve this fine specimen,” the Hill Country Visitor explained in social media. “We may just keep Genie as we call her, as a Mascot for the Steakhouse.” They also added that they hope that the 67-year old rock and roll legend will someday come to town to sample the steaks that they have, and of course, to meet Genie. Gene Simmons is best known as the rock and roll character “The Demon” of the KISS rock group. The band was one of the more popular rock bands of the 1970’s and 1980’s.