Kids Swim with Dolphins in this Children’s Hospital

Earlier this week in Orlando, Florida, seven patients were invited to participate in the Dolphin Interaction Program of SeaWorld. The program, also called DIP, invited patients that had previously suffered through trauma in their past to spend time to meet the dolphins close up and in person. The patients were then accompanied by trainers to a shallow pool where they could touch and swim with dolphins. Most of the patients that were invited were children that got to forget about their trauma and be a child again, even for just a few minutes. 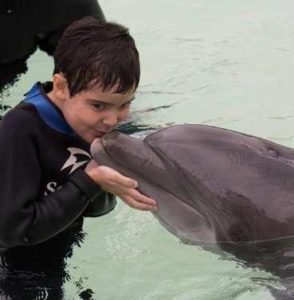 Among the patients that were chosen was Anastasie Abboud, a 10-year who was being treated by the Rady Children’s Hospital for deafness and other complications following an accident when she was younger. According to the caretakers, for most of these children, the experience is a great way to help the kids forget about their treatment and their condition, and it also seems to have a healing effect on some of them. 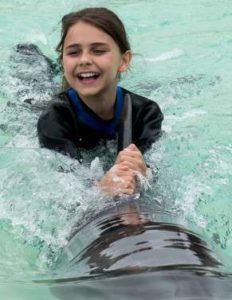 “Our kids get anxiety leading up to it,” said Carlos Delgado of the Rady Children’s Hospital. “But once they do it, they say this was the best experience ever. They forget their chemo and their experiences at the hospital.” The DIP program was first introduced to the children’s hospital by a dolphin trainer who was treated for cancer as a child. She said that spending time with these marine mammals helped her in a way that treatment could not. Each of the patients that were chosen had to get clearance from their own personal physicians before being allowed to travel to the park and spend time with the dolphins.