Photographer Josh Rossi wanted to find kids with real superhuman abilities to form his own Justice League. He chose brave children that were battling rare diseases and included them in his photo shoot so he could dress them up as the most iconic superheroes in comic books. Aside from making these kids’ dreams come true of becoming their favorite heroes for the day, the photo shoot also aims to inspire people with real life heroism that these children display every day. 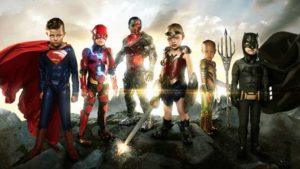 Among the children chosen were 5-year old Kayden Kinckle, who walks with two prosthetic legs and posed as Cyborg. Then there is 3-year Sofie Loftus, who is battling a rare form of cancer, who dressed as Wonder Woman. There is also 9-year old Teagan Pettit who was born with hypoplastic left heart syndrome, and he appeared as Superman. There is 2-year old Mataese Manuna, who has a rare form of leukemia, who posed as Aquaman. Also included was 7-year old Zaidan Strolrow who has severe ADHD, and came as the flash. And finally, there is 5-year old Simon Fulmer with neuroblastoma, who is obsessed with being Batman and got to fulfill his dream of being the caped crusader. 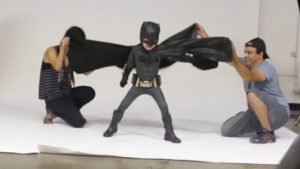 “A friend of mine recommended Simon because Simon’s been obsessed with Batman all his life,” said his mom, 34-year old Trisha Fulmer. “He never cries or complains about anything. He’s tough. He’s very bossy. He lets people know where he stands and what he wants them to do. Simon is Batman.” Rossi said that these kids embody what is like to have superhuman strength and each of them deserved to be in his Justice League.