In North Carolina, a 7-year old boy named Elijah McDonald helped his neighbor, Caroline McSwain get engaged. He was recruited by McSwain’s boyfriend, Alex Ryskiwich, to help with his marriage proposal. Elijah asked the unknowing girlfriend if he could be their “ring berry”. Of course, what he was trying to say was ring bearer. At first the message was not understood by McSwain, but when she turned around she saw Ryskiwich down on bended knee. 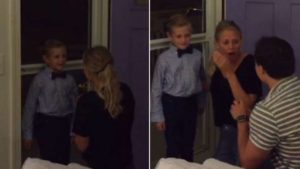 The entire setup was captured on video, where it was shared on social media and immediately went viral. It started when Elijah showed up at McSwain’s home in North Carolina wearing a tuxedo and a bowtie. When McSwain answered the door, that’s when little Elijah adorably asked to be her ring bearer.

“When Little Elijah asked if he could be my ‘ring berry,’ I thought maybe his parents had gotten some misinformation and thought we were engaged but we weren’t,” McSwain said afterwards. “I felt so awkward but I just gave him a hug and said, “Sure!” I mean, he just looked so cute, I couldn’t say no.” But then she turned around and saw Ryskiwich down on one knee and was overcome with emotion. Elijah has been McSwain’s neighbor since he was born. He was actually the perfect person to help with the proposal since McSwain actually also played a part in helping Elijah’s dad propose to Elijah’s mom when she was younger. 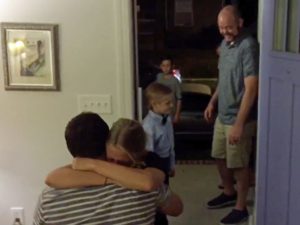 “After doing the same for his parents 10 years ago, I was so happy to have Elijah involved in the happiest day of my life. It’s amazing to think that both of our families have had an involvement in each of our proposals,” McSwain said. She added that it was like life coming full circle for the two neighboring families.