In the wake of the devastating Hurricane Harvey, there have been several sports figures that have made significant steps in helping the relief efforts, but none more so than football player J.J. Watt. Watt currently plays as a defensive end for the Houston Texans, and he has spearheaded fundraising efforts to get more financial aid in helping the people that need in Houston. 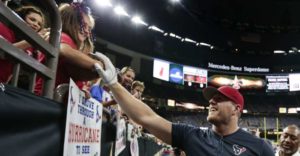 Watt started an online fundraiser during the weekend to help the victims of Hurricane Harvey. At first, his goal was a modest sum of $200,000. But by the end of the week, the donations reached over $17 million. Watt was online for most of the week, updating his followers on the progress of the fundraiser. He was sure to thank those that donated to the fund. His goal was to raise money for one week, but he eventually decided to leave the fund open to see how much more he could raise. 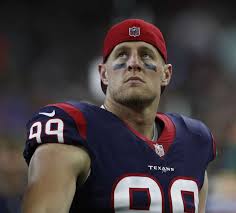 “The initial night, we broke the site, we couldn’t figure out how to get it back up and we somehow found the CEO’s phone number and called him at his house and got him out of bed,” said Watt “He helped us fix the site and it got rolling.” Watt says he already has a plan of action to use the money to help those affected in the city of Houston.

“My first phase is what I’m doing is this weekend, my teammates and I have semi-trucks rolling in from out of town that we filled up,” said Watt. “We have about nine semi-trucks that are going to come to town. And we have those all filled with stocks, supplies, water, food, clothing, everything. So, we’re going to give that out this weekend. I’m not just here for the initial fundraiser. I’m here to make sure that we take care of you down the road.”