In Mexico, a team of volunteer chefs from a local culinary school teamed up with locals to set the new Guinness World Record for the largest serving of guacamole. The students mixed and mashed avocados in order to prepare the dish, which was made in Concepcion De Buenos Aires, in Jalisco. Tourists and locals alike gathered to watch the preparations for the bowl of guacamole. 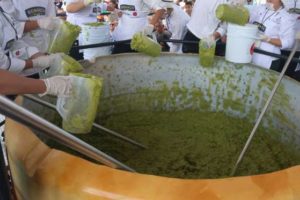 The recipe for the guacamole included more than 25,000 individual avocados, and it took more than 1,000 people to mash them for the record breaking dish. The avocados that were used were gathered together in an enormous bowl that carried 3 tons or more than 6,600 pounds of avocado dip. Aside from the 600 student chefs that helped with the preparations, more than 400 people from the town of Conception de Buenos Aires also chipped in. Most of the volunteers also came from the state capital of Guadalajara. 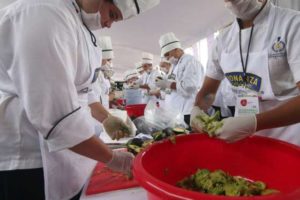 The governor of the state was in attendance to witness the record breaking feat. Also on hand were representatives from the Guinness Book of World Records to confirm if the feat would be achieved. Around 80 percent of the avocado consumption in the United Sates comes from the avocado orchards of Mexico. Jalisco is among the biggest producers of the fruit, which is also called “green gold”. The entire affair was for entertainment, but it also had its part in politics. Avocado growers in Mexico have had a enterprising relationship with the United States thanks to the North American Free Trade Agreement, which in now under threat from the current administration.