A 90-year old great grandmother has taken the internet by storm with her Instagram selfies. This elderly woman has a nose for great and often risky shots and takes funny and amazing selfies in the most unlikely places. It has only been two months since she started sharing her photos in social media, but already she has more than 41,000 followers. 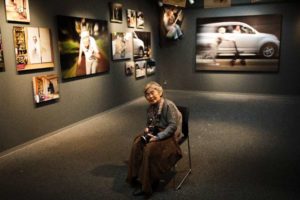 For her 90th birthday, Kimiko Nishimoto plans to take even more spectacular selfies for her loyal following. The photos on her account shows several fun-loving selfies including riding a broomstick like Harry Potter, or seemingly being hit by a car in a traffic accident. Nishimoto is actually relatively new to photography. She only took up the hobby when she turned 72. But she showed a knack for taking selfies and wonder shots and she quickly found a way to share these photos on the internet.

“I’ve actually never injured myself taking a photo,” Nishimoto said from her home in Kumamoto, in the western part of Japan. “I’m always focusing hard on taking a fun photo so I really don’t think about the danger too much,” she explains. “I love my camera. I even sleep with it by my bedside, just in case. I always have it close.” 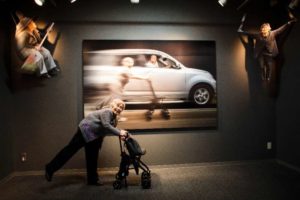 Nishimoto has three grandchildren and six great-grandchildren. She has showcased her work before with a solo exhibition in her home town, but she really enjoys her newfound fame in social media. She manages her social media accounts by herself through her smartphone, but she admits that her son helps her set up some of her shots.

“At first I didn’t even know that my photos were that popular,” said the former housewife, “It’s not so much that I’m trying to shock people, I just take photos that I find funny. It’s just a bit of fun really.”