In Japan, a civic group teamed up with a railway operator so that they could let a over 30 cats roam around inside train carts for an event. The cats were there to raise awareness on the culling of stray cats in the region. Most of the commuters were very fond of the cats that accompanied them in their daily trip, especially the small kittens that craved attention. 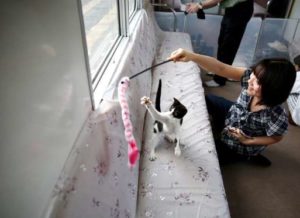 The train that was used was a train in Ogaki, a region in central Japan. The passengers who entered the train were greeted by furry felines. While most passengers were just happy to enjoy their ride with the cats, others were more interactive and mingled and played with some of the felines in the train. Some of the cats were also keen on being left alone, while others approached the passengers for some attention as well. Commuters did their part in raising awareness by posting pictures of the cats in the train on their social media accounts. 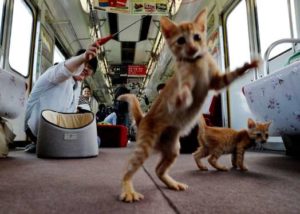 “I think it’s great more people are aware about stray kittens through events like this,” said Mikiko Hayashi, one of the passengers in the train. Coincidentally, Mikiko actually owns two cats that were previously strays. The event was hosted by Yoro Railway Co Ltd and a non-governmental organization named Kitten CafÃ© Sanctuary. There are currently 9.8 million cats in Japan. There has been a drop of stray cats admitted to shelters in Japan, which has also reduced the number of cats culled in the country.