A doctor in Italy named Roberto Anfosso makes his usual house calls in the rural area of northern Piedmont. Most of his clients are ageing people who decided to retire in this quiet region. But the unique thing about Dr. Anfosso is that he makes his house calls on horseback. That is because of the wide open areas where most of his patients are located, and the lack of roads in the area. 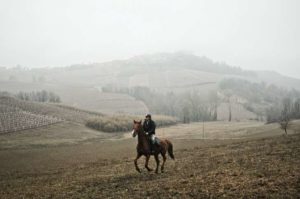 Northern Piedmont is full of vineyards and wild countryside as far as the eye can see. 63-year old Dr. Anfosso can be seen galloping through these lands during the week to see one of his patients. For the past decade, Anfosso has been making house calls to patients on horseback. People have gotten used to the sight of the good doctor with his white hair, neat mustache, and glasses, galloping to work on his horse Ambra. 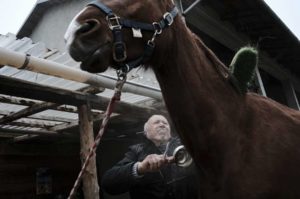 “This is one of the pockets of Italy with the longest life expectancy. The patients I visit are at least 70 years old. The oldest was 104,” says the good doctor. Dr. Anfosso says that riding through horseback is his preferred means of transport especially to routine non-emergency cases such as checking blood pressure and monitoring diabetic patients.

“Every week, I ride 80 to 100 kilometers (50 to 62 miles) on horseback. In the first three years, I made 1,000 visits, now I’ve stopped counting,” says the doctor. When Anfosso is not riding to meet the needs of his elderly patients, he also works in more conventional medical facilities.