A young Italian artist named Nazareno Biondo has spent the past few months sculpting a life-size Fiat 500 automobile out of a 5-ton block of white Carrara marble. The piece is a critique of today’s consumerist society. The sculpture is slowly looking more and more like the iconic car as Biondo continues works on all the small details of his art work. 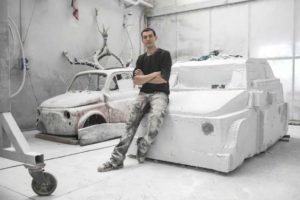 Biondo began working on the piece last year and he is slowly and meticulously carving out the shape of the car from the stone. Biondo uses a chisel as well as circular saws to shape the large block into a Fiat automobile. The” Topolino” is the original small two-door rear engine city car that symbolizes Italy’s post-war economic boom. Even after 60 years since its launch, it is still a symbol of Italy and how it was able to rise up from the ashes of war.

“It’s my biggest work so far,” said the sculptor from Turin. Ironically, the car brand Fiat is also from the city of Turin. Â Biondo graduated from Turin’s Albertina Academy of Fine Arts. He specializes in working with marble. He already has several sculptures including gold ingots, bundles of dollars, and even a Vespa motorcycle from white marble. 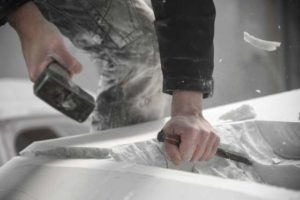 According to Biondo, this latest creation will be the evocation “of a bygone era, where the future of my generation could still be decided.” Once the piece is completed in a few months, the work will look like a car that aged and overused “because my pieces are a reflection of consumerism, of the waste of contemporary society.”